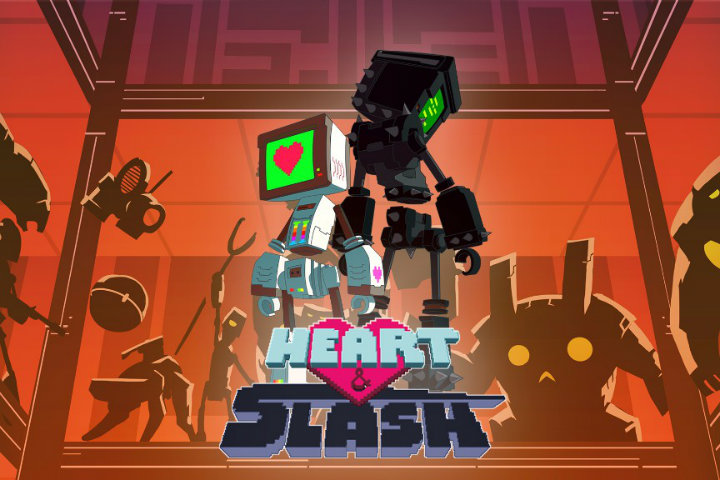 71 missions, 135 pieces of equipment, 6 selectable characters and 93 different enemies… with roguelike mechanics: random generation of maps, items and enemies. Every game will be a whole new adventure!

Put yourself in the “shell” of Heart, a robot that doesn’t function properly and struggles to maintain its identity against standardization henchmen. Along the way he meets Slash, a veteran of the dystopian world in which Heart&Slash takes place. You’ll have to try and get Slash’s attention, but how to do it will depend on the player. For every’ challenge (every chance to impress Slash) you’ll have a couple of opportunities that will end up defining the relationship between them and how the story ends. Will you choose your independence, or will you renounce to it in exchange for being loved? Or maybe you’ll find a balance between the two that will allow the relationship to thrive?

Fight using up to 75 different weapons and 60 different robot body parts that will change the way the game goes.

Teleport, stop time, fly with a backpack, jump against the wall, discover the weaknesses of your enemies… You can try thousands of different combinations to achieve your goal, from almost unimportant details to play back parts of the story to try to change the result.

If you die, try again from the beginning. As with any good roguelike, every time you start a new game, both the levels of fighting and the items or weapons you collect will change. In this way, a game will not be the same as the previous one, which makes Heart&Slash not an easy game.

A unique artistic and visual style that will take you back to classic games.

It offers a fast-paced and very dynamic gameplay system, with almost no time to take a breath, thanks to its short and intense levels.